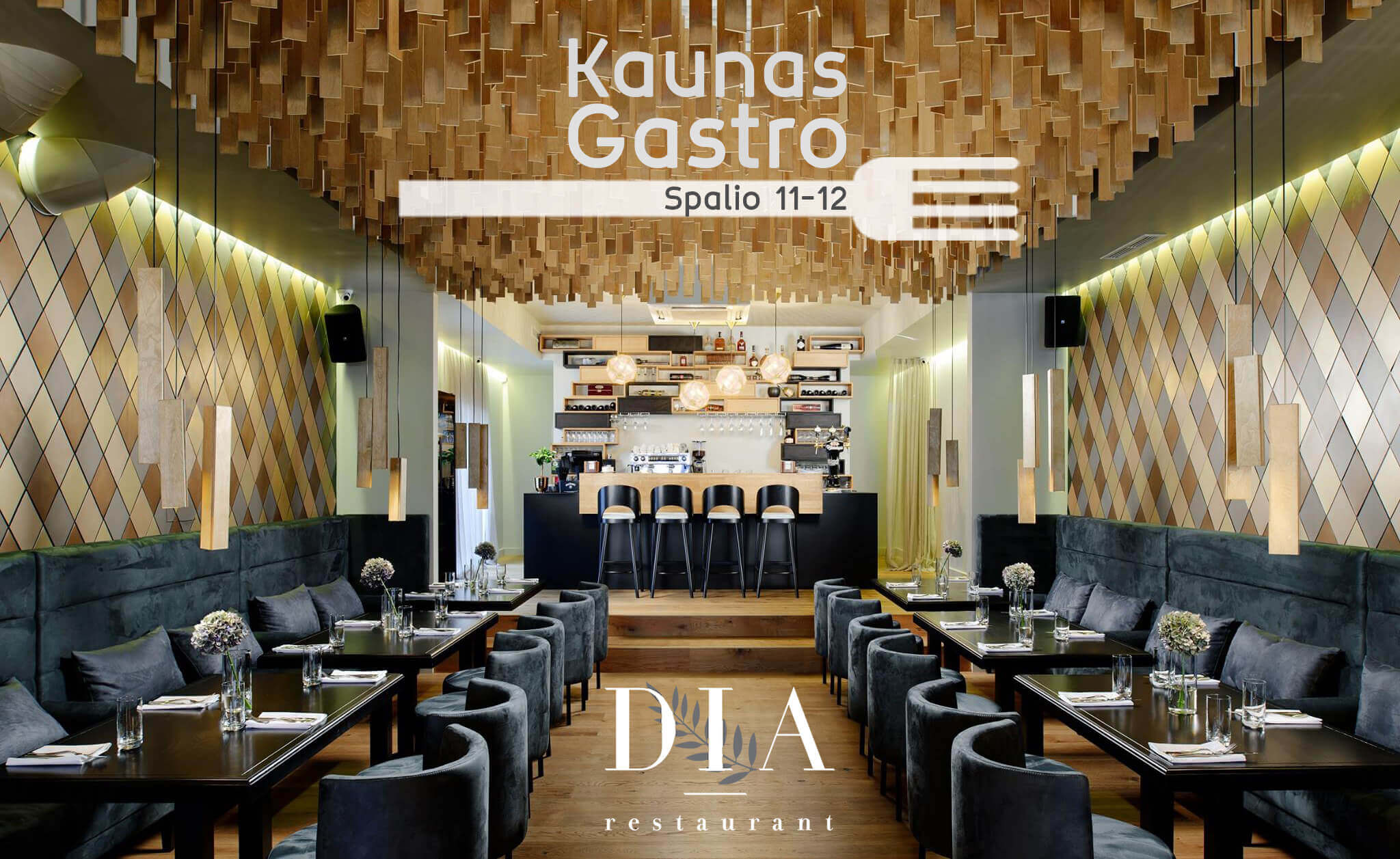 A calm city street. Modern elegance. Impeccable service and an undivided attention. Impressive interior and quality. These could be the words to describe restaurant DIA.

Restaurant is in the business only for two years, and it has already succeeded in gaining respect. As later becomes evident, success lies in their strong team and in extreme attention to each plate they serve. The restaurant is supervised by the manager Vaiva, while the team in the kitchen is led by a chef Edgaras, who has been working in this restaurant for almost a year.

Restaurant offers the taste of cuisines from all over the world. According to the manager, they do not focus on only one particular cuisine, but try to take what’s best from each of them. They pay attention to what produce could be attained when, and what could be made from that, as well as how to make it interesting and effective. “Since we represent the world cuisine, various ingredients come from different places of the world. It seems sensible that we do not look for a fish in the Baltic Sea, if it only grows in the Indian Ocean” says manager Vaiva.

However, the restaurant that has no problem with the logistics, can still sometimes be betrayed by nature. Then, they simply do not have one or the other ingredient. “If there is a storm in the ocean, we may not get the fish we want. Of course, it’s unfortunate, but we never try to trick a client with a replacement. We just say that we don’t have one or the other dish” says chef Edgaras.

Menu changes according to each season. Even though part of the produce comes from very far, because of the trustworthy providers and good system, it remains fresh. “We prioritise freshness. Because of the freshest ingredients we can keep the quality of the food and watch the clients come back for more” says the manager, also adding, that the clients return for the good ratio of price and quality as well.

“We cook as if it were for ourselves” says chef Edgaras – “I often say to my staff members, ‘look at that plate, would you be happy if you received that?’ and that solves everything.” The manager Vaiva agrees by saying that the plate has to not only look nice but to impress with its content too “People come here to have lunch, dinner. Only nice-looking plate is not enough anymore, we understand that a client wants to eat too” she claims.

Part of the restaurant’s success lies in the team. They reveal that there were some issues before, but everything worked out, and they can enjoy great results now. The manager says that a harmony in the team brings harmony to the plate too. “There are kitchens that have utensils flying around and staff screaming when there is a big number of orders, but here even I am surprised by the calmness in the kitchen” she adds.

Strong team helps to bring ideas to life and keep the restaurant as it is now. “Sustainability is not only recycling or waste management, it’s also the attitude of the people and the whole atmosphere of the restaurant” says the manager. Which is true, when you step into DIA, you can immediately feel the discipline, calmness and care.

Since DIA is especially focused on quality of the food, it comes as no surprise that they reach for quality in other areas too. Incredible attention is paid to the freshness of ingredients, and they have to be sure to take advantage of that freshness. Responsibility while preparing dishes helps to do that. “We try not to throw anything away, we bake our own bread, we try to get our clients used to the food of best quality” says the manager.

Both the chef and the manager agree that the situation of Kaunas restaurants is improving. „Clients are becoming more picky, so the restaurants must adapt too” says chef Edgaras. “We notice more various ingredients, different and more interesting ways of cooking them – this is exciting” he claims. The manager adds that there is still space to improve, but the steps are in the right direction.

DIA can be really proud of its performance last year. They took the first place among all the restaurants in Kaunas. Already having some experience, they promise to bring something new to the table. Literally. “Of course, it is going to be different this year, we know what to expect. Since the chef is new too, it will be different in the sense of taste too” says Vaiva.